We are pleased to share the feedback our clients provide to us following the completion of their projects.  You can read our customer letters by clicking the tabs below. 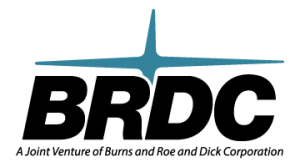 I would like to take the time to thank you for a job well done.

The job was handled in the most professional way. Without your unconditional support, outstanding performance, and your cooperation, the job could not have been completed to the highest standards that the Government and BRDC strives to meet.

You went over and above in your quality of work.

With your long hours and dedication, the finished project was a success.

Your actions made it possible for BRDC to work with the Government in [similar] circumstances in the near future.

We look forward to a highly successful business relation and continued projects.

To whom it may concern:

Cardinal Group Services installed a new foam roof on our commercial building in West Lebanon, New Hampshire in October, 2009. The total square footage of the new roof was over 35,000 SF (adjusted upwards slightly for corrugations).

The new roof covered a 24-year-old corrugated metal roof which had leaking problems a) where fasteners penetrated the roof, and b) at the eaves, where poor insulation caused rapid snow melt, ice dams, and water leaks. Our new roof (dense insulating foam, covered with a protective white acrylic surface coat) solved all these proglems, and more:

The new roof no longer leaks anywhere, and we are saving money every month on our heating bills, because the new roof as hadded approximately R-11 to what was already there.

Cardinal Group did everything they said they would do (something of a rarity today). Even though we did not sign an agreement until September, they arrived and began applying foam within a month, and worked to cover the entire roof before the end of October.

The men were courteous and very professional. They supplied car covers for our workers, our customers, and workers in nearby businesses when wind blew in their direction. They cleaned up thoroughly and left no debris or mess.

We had one leak after the job was finished, and Cardinal Group was on site wihin 24 hours to repair the leak — even though it later turned out that the leak was not their fault, but rather the result of pooly installed windows leaking a small amount of water during a windy rainstorm. They caulked and sealed around the windows, even though that was not within the scope of our agreement.

Before we hired Cardinal, we tried to find a Northern New England company to do this work, but we could find one and now I’m glad we didn’t. We are thoroughly pleased that we chose Cardinal Group for this project, and would recommend them highly.

If you have any questions, please feel free to call me at [removed for privacy].